We care about quilts, and hope you do too! 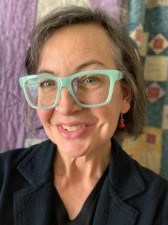 Amy Milne has been the executive director of the Quilt Alliance since 2006. She has two decades of experience as a nonprofit administrator, educator and artist. Amy has overseen the expansion of the Quilt Alliance’s oral history projects, including the creation of the Go Tell It at the Quilt Show! project, as well as Quilt Alliance events: Quilters Take Manhattan/a Moment and the Not Fade Away: Sharing Quilt Stories in the Digital Age conference. 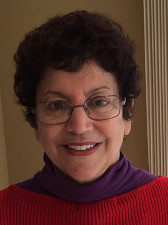 Debby Josephs, Office Manager, has worked in the nonprofit field for more than 15 years. Before moving to Asheville in 2006, Debby worked as office manager for Partnership in Philanthropy in Chatham, New Jersey, a nonprofit offering consulting and educational services to small nonprofits in the state. After graduating from the University of Wisconsin in Madison, she worked in the research department of Pershing and Co., a Wall Street firm in New York City.

Debby works in the Asheville office where she says it’s very exciting to be headquartered. “It’s a town filled with people who understand and appreciate the nature of nonprofits and all the hard work that goes into sustaining them.” 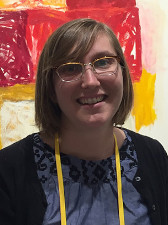 Emma Parker has worked for the Quilt Alliance since 2012, and has helped to develop the Go Tell It at the Quilt Show! program and streamline and revise the QSOS interview and training process. She has collected and edited over 400 Go Tell It at the Quilt Show! interviews at International Quilt Festival, QuiltCon, and the International Quilt Study Center & Museum. She holds degrees in Folklore & Library Science from the University of North Carolina at Chapel Hill. 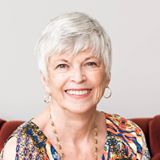 Mary Kay (Micki) Batte is a retired Financial Analyst from Pratt Whitney Aircraft. Taking her first quilting class in 1983 quilting became a major part of her life not only as an art form but, also, opening opportunities to work and share in her community and beyond. She is active in the Asheville Quilt Guild filling many positions including Quilt Show Chair, Guild Projects and Guild Liason to organizations as NC Arboretum, Mission Hospital (Camp Bluebird) and, in 2005 part of the research team which resulted Quilt Alliance’s move to Asheville. 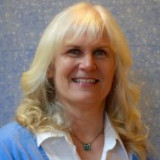 Mary Kay began quilting in 1996 on a “quilt-as-you-go” project and hasn’t stopped since. She loves a good challenge and has entered numerous quilt shows and contests. Her quilts have won national contests and have hung in the National Quilt Museum in Paducah. She has also contributed to a number of books and magazines including 500 Traditional Quilts from Lark Books and 100 Tips from Award Winning Quilters from AQS.

Currently Mary Kay works at The Quilt Show.com with Alex Anderson and Ricky Tims as a website editor, photographer, and videographer. She also serves as a production assistant for their online web show. Her creative muse is served as a pattern designer for Blend Fabrics LLC and Anna Griffin, Inc.

A graduate from San Jose State University with a degree in Information Resource Management, she worked for years in the local area networking industry in Silicon Valley. Upon retirement, she began working in a local quilt shop, teaching classes, and occasionally giving guild lectures. She spends her spare time hanging out with her two grown sons and cheering on her beloved San Francisco Giants. 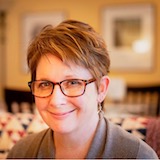 Frances O’Roark Dowell is the bestselling author of over twenty books for young readers, as well as several works of quilting fiction, including Birds in the Air, a novel, and a story collection, Margaret Goes Modern and Other Stories.

Frances began making quilts in 2007 and started a quilting podcast, “The Off-Kilter Quilt,” in 2010. She has a deep interest in quilt history and the documentation of quilts and the quilting community. In 2015, she and her husband made a short documentary on Uncle Eli’s Quilting Party, an annual quilting event that began in 1931, in Alamance County, NC. She’s currently a contributing writer for Quiltfolk, and has articles published or forthcoming in Curated Quilts,For the Love of Quilting and QuiltCon Magazine.  She lives in Durham, NC, with her husband Clifton and her good dog, Travis. 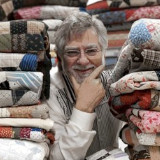 Mark Dunn, president and owner of Moda Fabrics in Dallas, Texas, began his career in Asheville, North Carolina, in 1966 as a third generation thread and yarn sales representative. In 1975 he started Moda Fabrics as a company to specialize in supplying independent sewing and quilting stores. Moda designs, prints and distributes high quality cotton fabrics as well as 60,000 unique items for specialty quilt stores. Moda Fabrics supplies over 4,000 independent quilt specialty stores throughout the U.S. and 20 other countries on 5 continents. Currently, Moda Fabrics is developing an educational department to work with schools and charitable organizations. Mark received the “Man of the Year” in 1985 for the sewing industry from the American Jewish Committee. He is a member of the Board of Directors of Quilts, Inc. Houston, Texas. Previously, he was a member of the international group, Inter-Sew, that was dedicated to the preservation of the craft of quilting. Dunn attended the University of South Carolina but has lived in Dallas, Texas for the past 33 years. Dunn is committed to promoting and preserving the art form of quilting. 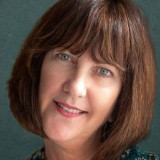 Lisa Ellis is a quilt artist, teacher and lecturer. She is passionate about quilting and using quilts to make the world a better place. She frequently lectures on healing quilts and inspires quilters to get involved in using their love of quilting to improve health care centers and hospitals. Ellis has directed a number of projects for healing-related installations including Walter Reed Army Medical Center, the University of Michigan, Auburn University, National Institutes of Health and INOVA Fair Oaks Hospital.

Ellis is the director of the non-profit organization Sacred Threads. Sacred Threads is a biennial exhibition dedicated to sharing our most personal quilts with themes of spirituality, joy, inspiration, healing, grief and peace/brotherhood.

She has advanced degrees in Math and Computer Science and worked for 23 years in the defense and information technology industry as an engineer, project manager and executive. Ellis retired in 2003 to focus her energies on volunteer work and her passion for the arts. In 2010, she started her own company, Giving Back Technology that provides information technology services to non-profit museums, galleries and other art organizations. 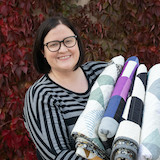 Laura Hopper is a historian, curator, writer, and quilter. She currently works as the Creative Operations Manager for Suzy Quilts. As a freelance quilt writer, her articles have appeared in Curated Quilts, Tatter Journal, Craft Industry Alliance, Quiltfolk, Modern Patchwork, and more. Laura worked for over 15 years as an award-winning museum curator focused on textiles — including quilts — and their preservation and interpretation. Laura is also a quilter who makes quilts inspired by music. Her quilts have been shown at QuiltCon, the National Quilt Museum, the International Quilt Festival, and more. She is currently Co-President of the Quilt Alliance and is a past president of the Chicago Modern Quilt Guild. She lives near Chicago with her spouse and daughter. 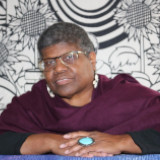 Dr. Carolyn Mazloomi is a historian, curator, author, lecturer, artist, mentor, founder, and facilitator — and has left her mark on many lives. Trained as an aerospace engineer, Carolyn Mazloomi turned her sites and tireless efforts in the 1980s to bring the many unrecognized contributions of African-American quilt artists to the attention of the American people as well as the international art communities.

From founding the African-American Quilt Guild of Los Angles in 1981 to in 1985 founding the Women of Color Quilters Network (WCQN), Mazloomi has been at the forefront of educating the public about the diversity of interpretation, styles and techniques among African American quilters as well as educating a younger generation of African Americans about their own history through the quilts the WCQN members create.

A major force as an artist in her own right, Carolyn Mazloomi’s quilts have been exhibited extensively in venues such as the Mint Museum, American Folk Art Museum in New York City, National Civil Rights Museum, Museum of Art and Design, Wadsworth Atheneum Museum, and the Renwick Gallery of the Smithsonian Institution in Washington, DC Her pictorial narrative quilts make plain her personal themes: family life, women’s rights, political freedom, and musical legacy. Her own quilts have appeared in over 70 exhibits, while she has curated 17 extensive exhibits of quilts made by members of the Women of Color Quilters Network, many of them traveling exhibits. Among the many exhibitions she has curated is “Still We Rise: Race, Culture and Visual Conversations,” which visually surveys 400 years of African American history. It is the largest traveling exhibit of African-American quilts ever mounted. 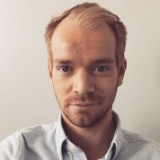 Bradley Mitchell’s formal education is centered around Marketing, Management, Events and Branding. Mitchell is originally from the historic spa town of Ilkley, England, an area of rich textile heritage and still home to the looms of British tailor,Thomas Burberry and the UNESCO world heritage site of Saltaire.

Mitchell joined the industry in 2014 and is the Chief Operating Officer at Aurifil Threads, an Italian company, famous worldwide for the manufacture of Egyptian cottons. Mitchell currently resides in Chicago, IL where he is project managing the establishment of Aurifil USA’s new flagship HQ. 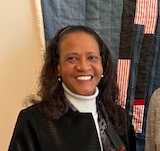 A’donna served almost 40 years as a Financial Analyst in the United States Air Force and civil service.  When she retired, she became a quilter and within a few years her interests expanded to the study of African American quilts.

She is the founder of the Washington African American Quilt Documentation Project (WA-AAQDP).  Through her grassroots organizing, she has encouraged individuals to preserve the stories attached to their family quilts to further the understanding of their social and cultural significance and build historical public records for African American quilts more broadly.

A’donna collects and studies antique quilts, quilt patterns, and quilt documentation publications.  As a member of the American Quilt Study Group (AQSG) she is the Area Representative for the San Francisco/Bay Area, and presently consults at the Berkeley Art Museum & Pacific Film Archive.  She is a graduate from Regis University with a degree in Finance and is currently working toward a graduate Certificate in Quilt Studies. 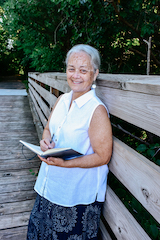 A poet and fiber artist, Gwen Westerman lives in southern Minnesota, as did her Dakota ancestors. Her roots are deep in the landscape of the tallgrass prairie, and reveal themselves in her art and writing through the languages and traditions of her family. She is an enrolled member of the Sisseton Wahpeton Oyate, and Professor in English and Humanities at Minnesota State University, Mankato. Her quilts have won awards at the juried shows of the Northern Plains Indian Art Market, the Heard Museum Guild Indian Art Fair & Market, and the Eiteljorg, and have been exhibited in Minneapolis, Sioux Falls, Anchorage, Houston, Tulsa, Fargo, and Lincoln. She is the author of two poetry collections, Follow the Blackbirds and Songs, Blood Deep, and co-author of Mni Sota Makoce: Land of the Dakota, a history of Dakota land tenure in Minnesota.