Running Stitch, A QSOS Podcast, is hosted by Janneken Smucker, Professor of History at West Chester University. Join us as we explore quilt stories, revealing the inner thoughts, feelings, and motivations of contemporary quiltmakers by drawing from Quilters S.O.S. — Save Our Stories, the long running oral history project created by the nonprofit Quilt Alliance in 1999.

Quilts and quiltmaking serve as a lens to examine some of today’s most pressing issues, including activism, public health, politics, race, and the economy. We’ll dig into the QSOS archive to listen to excerpts from past interviews, and bring back interviewees to ask them about what they are working on and thinking about presently. Season 1 guests include Victoria Findlay Wolfe, Carolyn Mazloomi, Thomas Knauer, Melanie Testa, and Jinny Beyer. Season 2 is coming December, 2020!

Listen to the Running Stitch trailer: 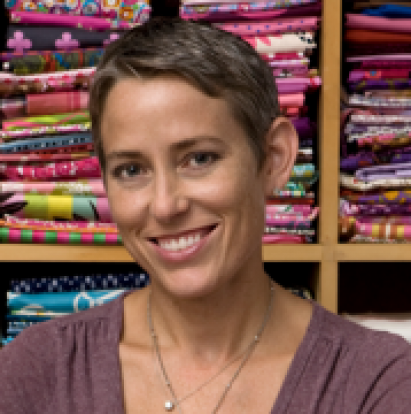 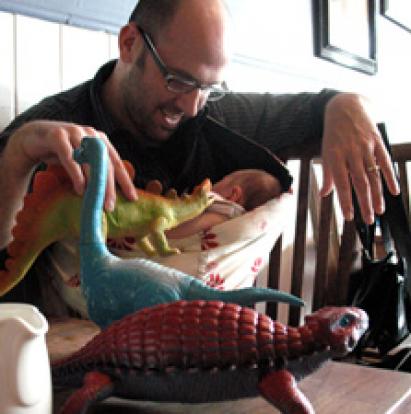 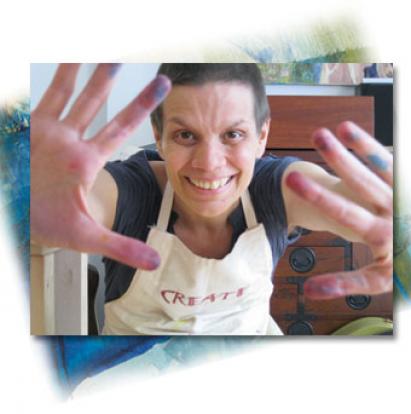 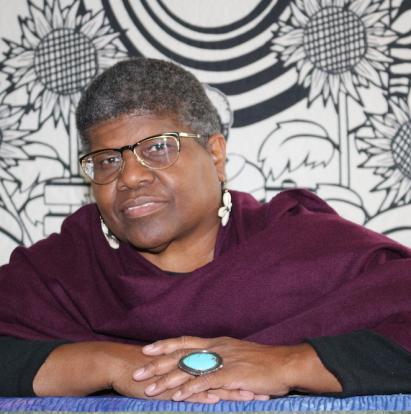 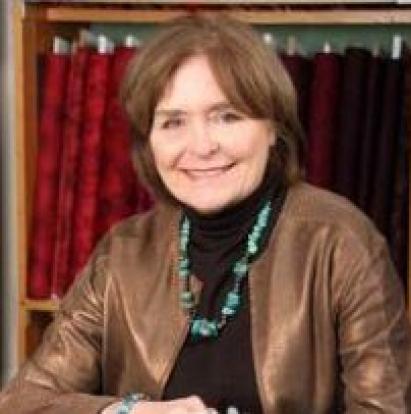 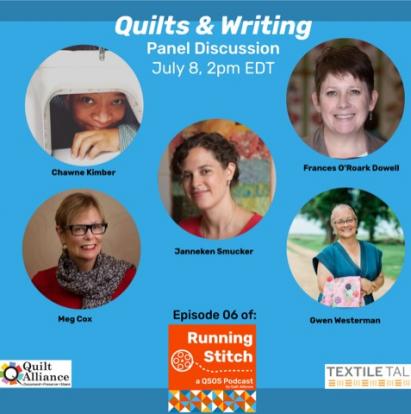 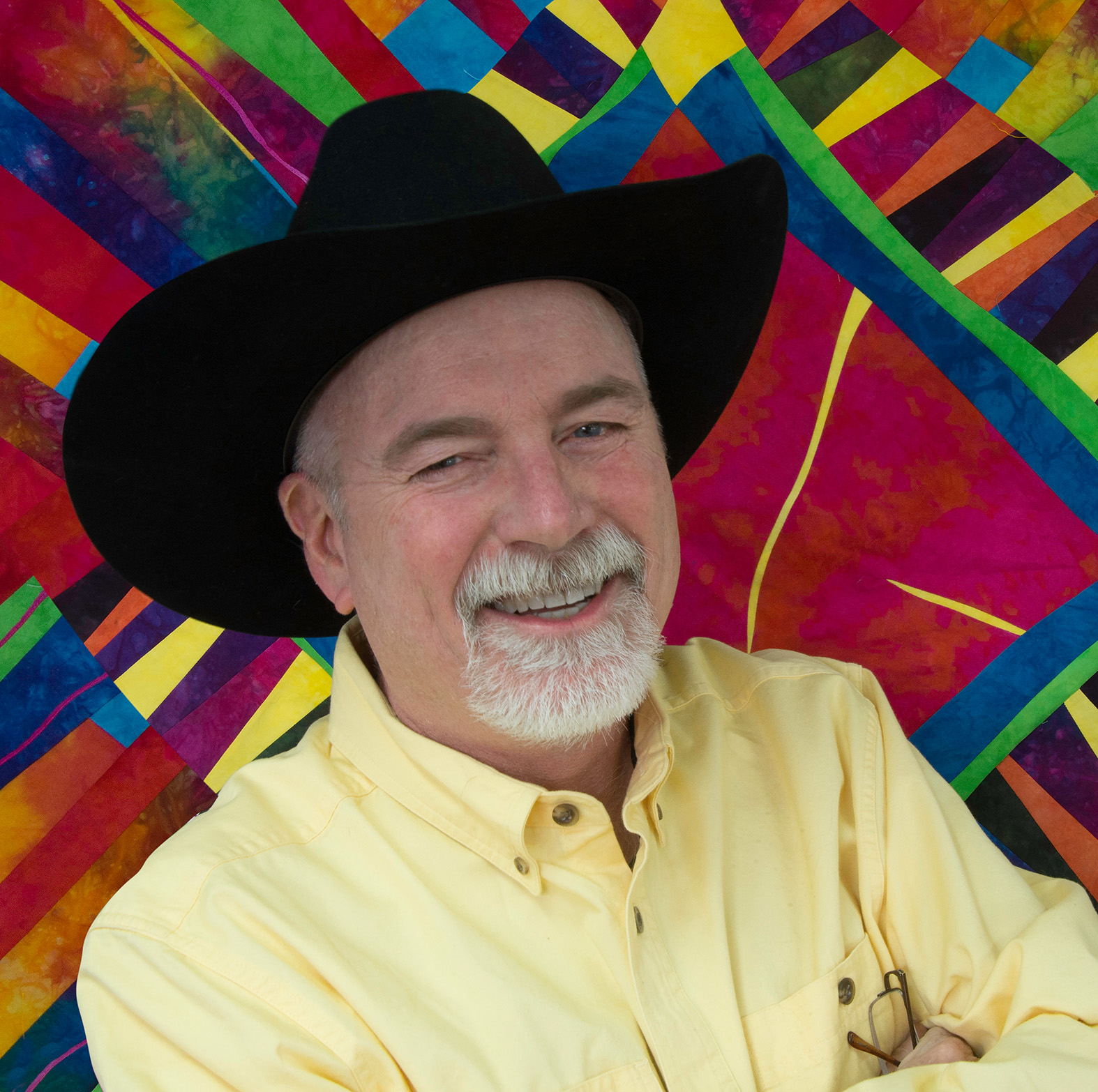 Episode 1: On Creativity with Ricky Tims 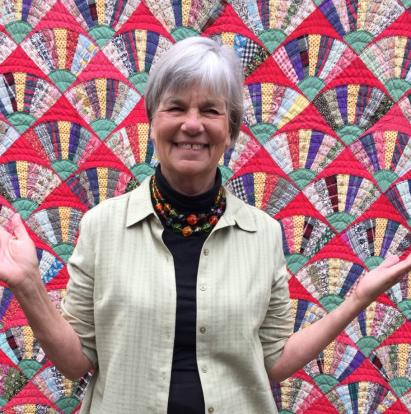 Welcome to the very first episode of Running Stitch, the QSOS Podcast. For our very first episode, we’re talking with New York City quilter Victoria Findlay Wolfe. Victoria was first interviewed for the QSOS project in 2011. Our host, Janneken Smucker, talks with Victoria about that first interview, her first quilts, and how her career has evolved in the nine years since. Janneken and Victoria also talk about making a first quilt with their young daughters, what makes a great quilt, and just why we care so much about quilt labeling. Join us for an episode all about firsts!

Victoria Findlay Wolfe, Is a NYC based International Award Winning Quilter and teacher. She was raised on a farm in central Minnesota, and learned to sew and quilt when she was just four years old. Victoria graduated from the College of Visual Arts in St. Paul, Minnesota with a bachelor’s degree in Fine Art in 1993, and a year later moved to New York City.

Why I consider that “Everything But the Kitchen Sink” quilt my first quilt, was it was something that really was helping me transition from a painter back into a quilt maker… 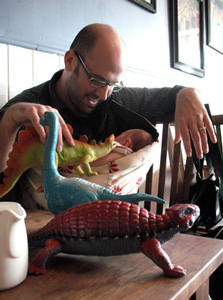 Episode 2 of Running Stitch focuses on quilts and activism. Quilters have long used their work to make statements and advocate for change, tackling abolition, temperance, suffrage, and many other social justice issues. Join host Janneken Smucker for a conversation with quilter and author of Why We Quilt, Thomas Knauer, discussing why quilts are great objects for making statements, and how Thomas communicates politically through his own quilts.

Thomas Knauer began his career teaching design at Drake University before turning to quilting. He has designed fabrics for several leading manufacturers, and his work has been exhibited in quilt shows and museums across the globe, including the International Quilt Study Center & Museum, the New Museum of Contemporary Art, Des Moines Art Center, the San Jose Museum of Quilts and Textiles, and the Cranbrook Art Museum. Knauer is the author of Why We Quilt, as well as two previous books, including The Quilt Design Coloring Workbook.

When we give a quilt to someone, there’s a desire to protect them. To keep them warm and safe. 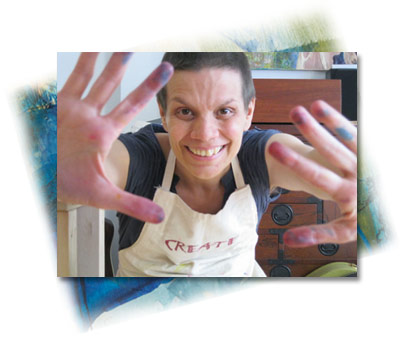 Let’s face it. It’s 2020 and 2020 won’t quit. We are living through difficult times. While the effects of the COVID-19 pandemic are unevenly felt, we are all in the midst of it. QSOS oral history interviews often ask, “How have you used quilts to get through a difficult time?”Our guest for this episode, artist and maker Melanie Testa, first interviewed for the project in 2010, joins host Janneken Smucker to share how she has responded to the COVID-19 crisis by digging into her vast fabric stash and a network of generous friends to make masks to distribute to essential workers.

Melanie Testa is an accomplished textile and quilt artist. She holds a degree from the Fashion Institute of Technology in Textile/Surface Design and exhibits her fiber art at various galleries and quilt shows around the country. Her most recent book offering, Playful Fabric Printing is coauthored with Carol Soderlund by Crafting a Life, LLC.

In addition to this, Melanie has written Dreaming from the Journal Page, Transforming the Sketchbook to Art by North Light Press and Inspired To Quilt, Creative Experiments in Art Quilt Imagery by Interweave Press and also authored a Quilting Arts DVD Workshop called Print, Collage, Quilt.

Making has always been my go-to. I use it as a therapeutic means to meditate and clear my mind. Dipping into being creative really helps me to sort out the noise, to ignore the noise I don’t need to pay attention to, and focus on just simply being. 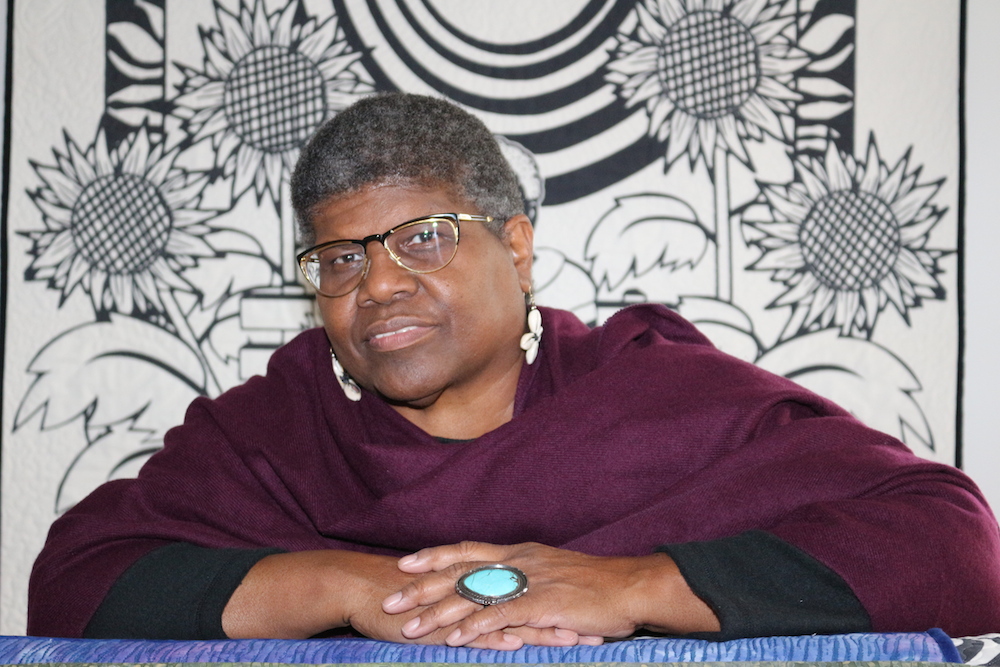 During the week after the killing of George Floyd, Running Stitch host Janneken Smucker spoke with Dr. Carolyn Mazloomi about quilts, race, and the long struggle for civil rights. Dr. Mazloomi founded the Women of Color Quilters Network and has curated many landmark exhibits centered on race and civil rights, including “Journey of Hope: Quilts Inspired by President Barack Obama.” This episode features excerpts from several oral history interviews conducted for the Quilts for Obama QSOS sub-project.

Historian, Curator, Author, Lecturer, Artist, Mentor, Founder, and Facilitator — the remarkable and tireless Dr. Carolyn Mazloomi has left her mark on many lives. Trained as an aerospace engineer, Carolyn Mazloomi turned her sites and tireless efforts in the 1980s to bring the many unrecognized contributions of African American quilt artists to the attention of the American people as well as the international art communities.

From the founding of the African-American Quilt Guild of Los Angles in 1981 to the 1985 founding of the Women of Color Quilters Network (WCQN), Mazloomi has been at the forefront of educating the public about the diversity of interpretation, styles and techniques among African American quilters as well as educating a younger generation of African Americans about their own history through the quilts the WCQN members create.

Her own quilts have been included in over 74 exhibits and she herself has curated 21 extensive exhibits of quilts made by members of the Women of Color Quilters Network, many of them traveling exhibits. Among the many exhibitions she has curated is “Still We Rise: Race, Culture and Visual Conversations”, which visually surveys 400 years of African American history. It is the largest travel exhibit of African American quilts ever mounted. In 2014 Mazloomi, along with co-curator Dr. Marsha MacDowell of Michigan State University Museum, presented an exhibition to honor Nelson Mandela in Johannesburg, South Africa.

Dr. Mazloomi’s quilts can be found in private collections around the world as well in distinguished museum collections in the United States. To date Dr. Mazloomi has published twelve books highlighting African American-made quilts. Her artistic work, as well as her defense of solid research, has disrupted long-standing myths about African American quilts, myths much debated among quilt historians and quilters alike, and thus moved the conversation about African American quilt history forward to more a solid academic footing. Visit Carolyn’s website.

This is the importance of quilts: to tell these stories. I can think of no better way to tell a story then have a visual piece made from something that people are accustomed to wrapping themselves up in for warmth. And security.  It’s safe, it tells a story, but at the same time, it’s loving as well. 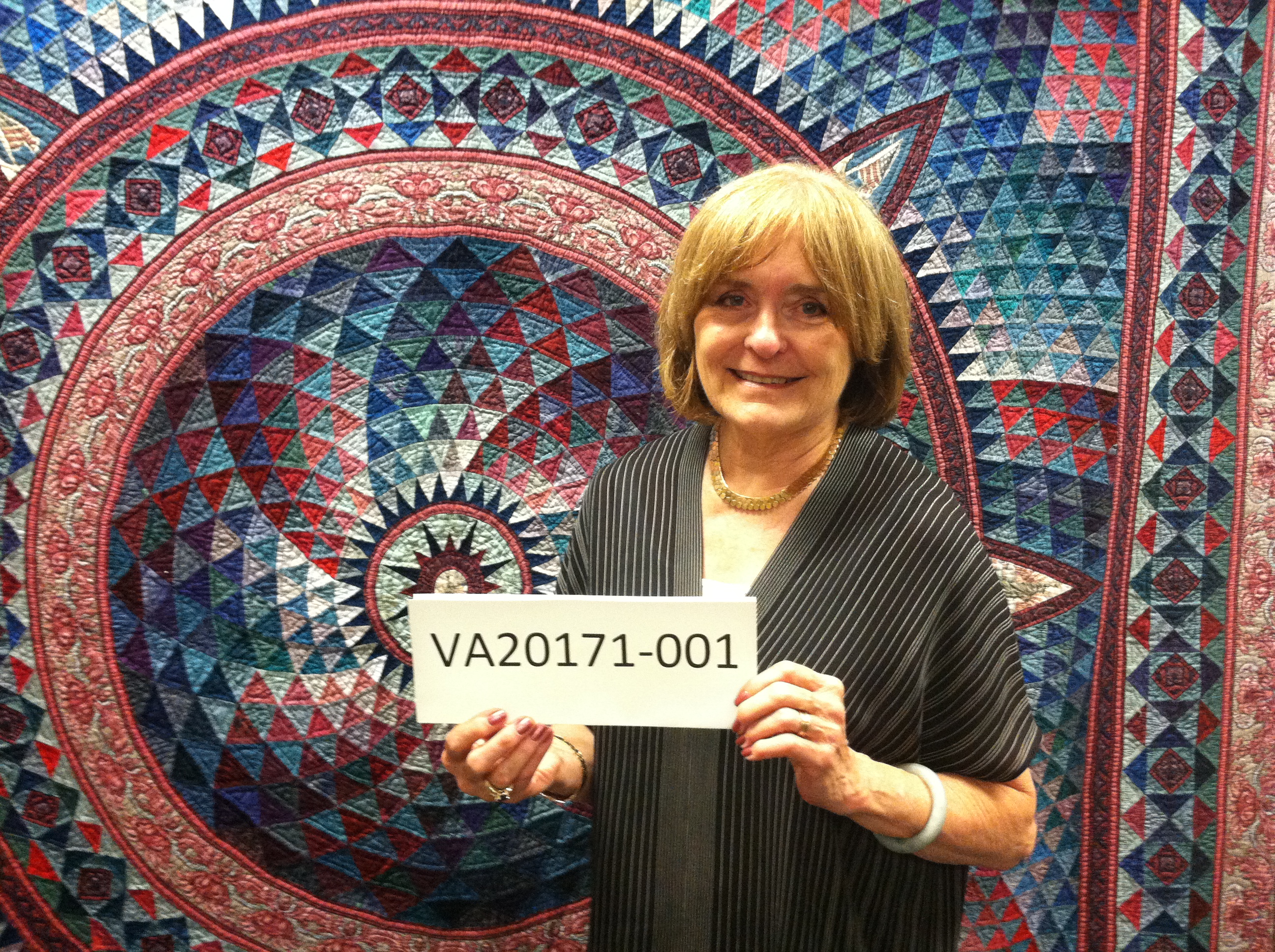 Quilt legend Jinny Beyer has seen it all in the quilt world over the last 50 years. In this episode, host Janneken Smucker revisits Jinny’s 2013 interview when she shared the quilt she made following 9-11. Jinny joins Janneken to discuss quiltmaking amid crisis, including how independent quilt shops like Jinny Beyer Studio are weathering the current pandemic.

For more than four decades, Jinny has been quilting, teaching, writing books and designing fabrics for quilters. She is world-renowned for her fabric designs (manufactured by RJR Fabrics), and especially for her border prints. Jinny has traveled world-wide to teach. She’s the author of twelve books, including The Quilter’s Album of Patchwork Patterns, an encyclopedia of more than 4000 patchwork blocks that incorporates historical and drafting information — a 6-year labor of love. Jinny loves to garden and cook and she and her husband live just outside Washington, D.C. in Great Falls, Virginia. Her own quilts, as well as antique ones, adorn the beds and walls of her 260-year-old historic farm house home. Visit Jinny’s website. 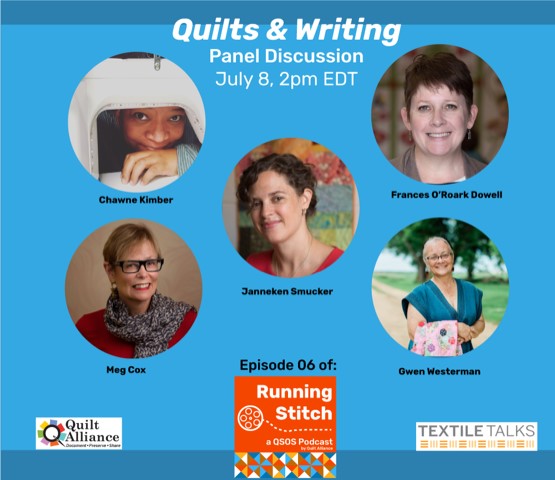 This episode–our last episode of season 1 of Running Stitch–features a panel discussion about quilts and writing moderated by host Janneken Smucker. Our four panelists are quilt journalist Meg Cox, novelist Frances O’Roark Dowell, quilter and mathematics professor Chawne Kimber, and poet and educator Gwen Westerman. All four are writers and quiltmakers and you’ll hear them discuss connections between quiltmaking and writing, their creative processes, and the intersection of quilts and words.

The discussion was recorded live as part of the Textile Talks lecture series, featuring public programming from six quilt and fiber art organizations across the country. You can see the video recording of this discussion on YouTube.

There’s this process of discover that’s amazing, and which is my favorite part of the creative process. Once you start failing is when you get into the really interesting places.

This episode sponsored by Ricky Tims

Running Stitch is back for Season Two, again digging into the QSOS oral history archive to explore the meaning of quilts in American life. In this episode, host Janneken Smucker talks to quiltmaking legend Ricky Tims about the role of creativity in his life. As a quiltmaker, musician, composer, co-host of The Quilt Show with Alex Anderson and Ricky Tims, and founder of Quilt Life magazine, Ricky embodies creativity. We’ll revisit his first interview for the QSOS project, recorded two decades ago in 2000, and continue the conversation with a new interview exploring the intersection of music and quilting, his perspective on the creative spirit, and Ricky’s new novel, Lizzy Albright and the Attic Window, co-written with Kat Bowser.

Ricky Tims has successfully blended two diverse passions into one very unique and interesting career. His skills as a pianist, composer and producer have been evident by the thousands who have heard his music. His success as a quilter is equally significant.

He is known in the international world of quilting as a best-selling author, enthusiastic and encouraging teacher, an award-winning quilter, fabric designer, and a talented and spellbinding speaker. His innovative and entertaining presentations, feature live music and humor combined with scholarly insights and wisdom. His quilts have been displayed worldwide and are highly regarded as excellent examples of contemporary quilts with traditional appeal.

My message to you is to believe in the unbelievable, reach for the impossible, and remember that not everything is as it seems…

This episode sponsored by the Robert and Ardis James Foundation

Quilters S.O.S. – Save Our Stories oral history interviews often include the question, “What makes a great quilt?” Running Stitch host Janneken Smucker asks today’s guest, quilt historian Merikay Waldvogel, to answer this most challenging question, while they also listen back to other interviewees’ responses. What’s the answer? Good planning? Lots of fabrics? First place ribbons? Immortality? Tune in to hear from one of the world’s foremost quilt authorities, who has seen 10,000s of historic quilts, and finds something to like about each one.

Merikay Waldvogel is an internationally known quilt historian author, and lecturer. She is widely considered an expert on mid-20th century quilts. Her expertise and tireless research into quilting and the quilters who made them led to her induction into the Quilters Hall of Fame in 2009.

Learn more about Merikay at https://quiltershalloffame.net/merikay-waldvogel/

People put things into their quilts, and a quilt is a gift from someone to someone else—maybe even hundreds of years down the road.