On August 18, 1920, the 19th Amendment of the United States Constitution was adapted guaranteeing American women the right to vote. The amendment reads: “The right of citizens of the United States to vote shall not be denied or abridged by the United States or by any State on account of sex” and “Congress shall have power to enforce this article by appropriate legislation.” 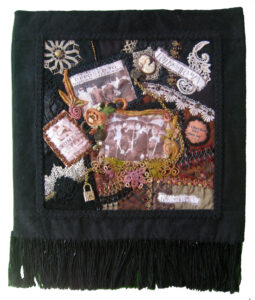 Gerry Krueger of Spokane, Washington, made this quilt titled “It’s a Man’s World Unless Women Vote!” in 2011 for the Quilt Alliance contest, “Alliances: People, Patterns, Passion.”

When seeing the photo of the men facing backward juxtaposed to the photo of the women facing forward, I knew I wanted the suffrage movement to be the theme of my AAQ entry. I included the chain as it was not only a device used by suffragettes to gain attention; it was symbolic of their struggle to break the bondage imposed by being denied the right to vote.