Survivors and witnesses
On this day in 2010, Hermine “Miep” Santruschitz Gies died at age 100 in the Netherlands. Gies helped hide Anne Frank and her family from the Nazis during World War II, and was the rescuer of Anne’s now-famous writings. In her 1987 memoir, “Anne Frank Remembered,” Gies wrote:
I am not a hero. I stand at the end of the long, long line of good Dutch people who did what I did and more—much more—during those dark and terrible times years ago, but always like yesterday in the heart of those of us who bear witness. Never a day goes by that I do not think of what happened then. 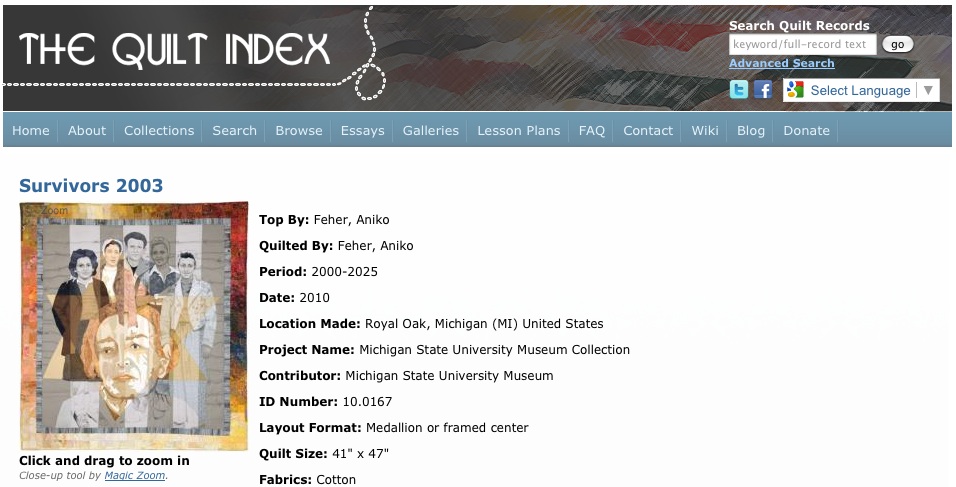 The quilt above, titled “Survivors 2003,” was made in 2010 by Aniko Feher of Royal Oak, Michigan. Feher includes the story of the photo in the Quilt Index record; here is an excerpt:
This is a memorial quilt dedicated to my mother, who was a Holocaust survivor. She was liberated in Bergen-Belsen. After liberation Bergen-Belsen became a DP camp. It took her a while to recuperated from starvation. Once she was physically stronger she wanted to return home and find her family. Survivors were promised transportation home but after many months no transportation was provided. My mother with 4 other survivors from Budapest decided to go home on their own. Most of their journey was on foot. Somewhere on that journey a tiny group photo was Taken of the 5 survivors. In the group photo my mother is the second from the left, the large portrait is also of her when she was old and fragile, before she passed away.