Winter is in full force here in North Carolina, where we’re enjoying frozen temperatures and occasional threats of snow. With the spirit of winter in mind, today’s Q.S.O.S. Spotlight is shining on Jacque Hensell, and her quilt “Let It Snow”. The quilt was the first was the first she made after months of not quilting. The story of the small coincidences that lead to her quilting again in a time of need is a wonderful reminder that sometimes, spring can be just around the corner.
“The “Let It Snow” quilt is very special to me because there came a time when I had many demands on me. My youngest grandchild was diagnosed with a terminal illness. My family was committed to taking care of him at home. I totally lost interest in quilting. I was very sad because I had lost my interest in quilting. I tried to get the interest back by going out and buying fabrics or buying new patterns. I’d go home and there would just be no spark at all. I would then just give the things I had bought away. I teach quilting and many times students come to class and they don’t have their block completed. They usually say, ‘I was just too busy to do my block,’ or ‘I didn’t getto it because I have a lot going on.’ I couldn’t image why someone couldn’t get a block done. Since I began quilting, I would get up in the morning thinking about quilting and go to bed thinking about quilting. Then that period of time came for me when I couldn’t work on a block. Actually, I didn’t pick up a needle for 9 months. This quilt was the turning point in my quilting life. It was the reason I got back into quilting. I know there was definitely divine intervention in the series of events that restored my quilting interest… 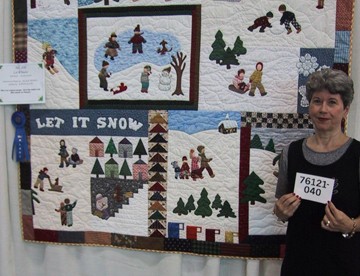 Because of the things in my personal life, I had cut back in the number of classes I was teaching. I had one class that I’d been with for 5 years. They met in a church and the group was called Quilts and Other Comforts. They had a devotional and refreshments before class. They were a wonderful group and really my favorite class. They knew I had other demands in my life and that I was cutting back on my quilting classes, but they just insisted that our group continue. I tried to tell them I didn’t have time to work up a new project for them, but I had one quilt project we could do. The quilt class I offered them was named “Snowbound.” I had taught this class many times and the preparation work was done. The group all said they wanted to do this project even though two of the girls had taken this class from me before. The girls that had taken it before said it would give them an opportunity to finish their project. In the “Snowbound” quilt, there is one block that is a nativity scene. The class had recently done a nativity scene, so one of the girls in the class asked if I could come up with a substitute for the nativity scene. I said, ‘Well that really won’t be a problem,’ and I didn’t really think it would be. I just thought, ‘Well, I’d just get to that when I have to. I was just kind of managing my life on a crisis basis. I’ll come up with something for that, you know, I just said, ‘Okay.’

Also at that time, my daughter was having major surgery. I was going to be with her during this time in the hospital and I knew that I needed something to bring to work on… So the very next morning, I came in to my daughter’s hospital room and on her breakfast tray is a skating scene placemat. I instantly saw my replacement for the nativity scene. At that point, I was kind of like my old self, I was going, ‘Oh Heather, just a minute, don’t spill any food on this, just a minute, let me–,’ I got really excited. So then I began sketching a skating scene from her placemat that had been on her tray…And so, as I sketched, I started thinking, ‘Well, you know, I’ve always wanted to redo that “Snow Bound” quilt, I might just make that quilt again as well, and I might just do that, I think I’ll make all their clothes in flannel.’ And I just start thinking and my mind just starts thinking about what I’m going to do. I was very enthusiastic about the project. I could hardly wait for us to get home and start working on it.
The following Monday, I needed to go and be with my son’s family to help them and care for my grandson. One thing I always did when I was at his house was read a story to the two middle grandchildren before they took their naps. I always read them one small book or one chapter of a chapter book. That particular day, one of them said they wanted two books. I just said, ‘No, it’s going to be one book.’ Well, to make a long story short, he insisted it was going to be two books and I was just too tired to argue with him. I said, ‘Okay, today it is going to be two books but from now on you understand that it is going to be one book.’…So, the second book that was chosen for me to read was a new book that they had just gotten and it was called “Let It Be Snow.” It was a story about children playing in the snow. I was so excited. As I was reading, I keep seeing the children in the book as figures on my new quilt. I actually used almost all the figures that were in that book on this quilt. I just converted them to appliqué patterns. They were so easy to convert to appliqué patterns. Up to this point, I had thought that all the event were just a coincidence, taking the lesson plans to the hospital, […] her placemat being a skating scene. But then when, the following Monday, when my grandson insisted on me reading two books and the second book being the snow book I knew that somebody was helping me get back into quilting.”