Today’s Q.S.O.S. spotlight is on a fabric I wear every day but rarely sew with: denim. I’m sure most quilters have great genes, but there are a few quilts in the Q.S.O.S. archive that have great jeans, too!

First, a video from our Go Tell It at the Quilt Show series from Hollis Chatelain at the 2013 International Quilt Festival. Hollis shares the story of a quilt she made from denim and raw-edge appliqué:

Natalia Burdanajdze from the Republic of Georgia shared a denim quilt she made from her daughter’s jackets and purses. 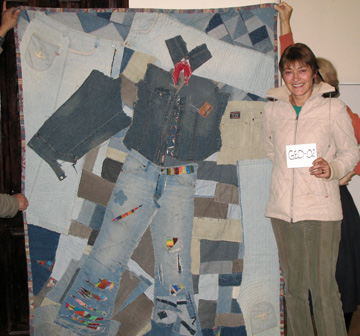 “It was the Alabama State Gee’s Bend exhibition and I loved one work very much. [Karen Musgrave brought an exhibit of twelve quilts from Gee’s Bend to Georgia in 2005.] It was a quilt made of jeans. It was for me a good idea to do something from jeans. So I did one of jeans for myself. “Jean’s Generation” is in our theater, it is very good, spectacular performance… Yes, inspiration from Gee’s Bend exhibition because I loved one thing from this exhibition very much; the using of the old clothes. This one is made from my daughter’s jeans… It’s by hand. All of the panel is by hand.Karen Musgrave (interviewer): And you hand quilted it. Was it difficult?

Natalia: It was very hard because it was strong material. The pieces are from bags, my bags also. And I sewed little pieces that I had.

Karen: You cut away the denim pieces so you could see color underneath.

Natalia: Yes. I did that special to be more interesting because it was a mix of jeans and fabric… Pockets… and zippers….  It is Wrangler’s. It’s Levi’s.”

Teresa Barkley shares a “patchwork” quilt she finished when she was 15: 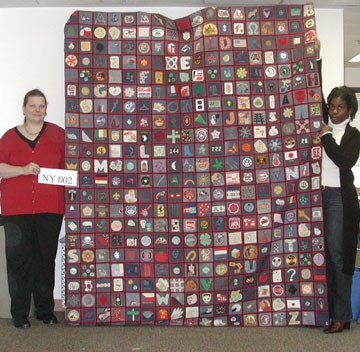 “Okay, the quilt I have with me today is called “Denim Quilt” and it’s the first quilt that I ever completed that I felt really satisfied with–it was a two year project. I started it in 1970 and finished it in ’72. It got much bigger than I thought it would be when I started, which has been an ongoing problem for me. Things frequently get bigger than originally planned. It is a collection of mostly worn denim squares cut from jeans. They are decorated with embroidery and appliqué that’s hand done as well as with commercial company patches, Army patches, Girl Scout patches, a really wide range of designs. There are 396 squares of denim, each four inches and the designs on them are all different. The idea for the quilt came from a quilt that my great-aunt made. She saw directions for making such a quilt in a Woman’s Day Magazine in the early seventies, I believe. And on a visit to Minnesota, I saw the quilt that she had made, where the designs on each square were much simpler, and I thought that this would be a really fun project. I had always been very interested in quilts and I think I had started some piecework that I had never finished of traditional designs, but the image of this quilt really fascinated me. Every square was different and that collage kind of aesthetic had always interested me. It was an easy project to work on a little bit at a time. I was a high school student at the time. All of the edges of the squares are turned back and crocheted with red crochet cotton and into that crochet is black crochet cotton, and then those edges are sewn together. Over a two year period of time I collected patches from places that I visited. I embroidered things. I appliquéd the whole alphabet. I embroidered the signs of the zodiac.

I had long been interested in a collection of Army patches that were my father’s when he was a small boy. And when I began the project I really wanted some of those patches and he was not interested in parting with them. And over the course of the project he came to see how really important this was to me and what a significant thing it was becoming and in the end he was very willing for me to choose as many patches as I wanted of his collection to put into the quilt on the condition that I never sell it. He said, ‘If you ever want to sell that quilt, you have to give me back the patches.’ I reached a point where I realized that it was plenty big, I had plenty of squares and I set out to arrange them on the floor with the alphabet in order and the Army patches evenly spaced, the alphabet evenly spaced. I’m not sure what my goal was in making it actually. I was fourteen when I started it and fifteen when I finished it. I felt very strongly about finishing it before I was sixteen. I had read in quilt history books that by a certain age you should have 12 quilts done or you weren’t going to be ready when you were married, something like this–I knew it wasn’t practical for my life but I liked the idea of it. I liked what few historical stories I had read about quilts. At the time there weren’t very many books to be had about quilts but I had read every one of them that I could find. And I just knew this was something I was going to continue to work at. I had quilts that I was familiar with– there were two or three. My mother had two quilts that her grandmother had made and I loved looking at those. My grandmother on the other side of the family had one quilt that she had made. And the mix of all kinds of things from all over the place put together in something new, fascinated me. I’ve never been very interested in quilts that were two contrasting fabrics put together or a solid color. It’s not the object of the quilt that interests me so much as the process of the assembling things from all over the place into something new that means something different. The juxtaposition of all these things from a different place brought together in a particular theme is what really interests me about quilts that they have some kind of story with them.”

You can read more quilt stories on the Quilters’ S.O.S.- Save Our Stories page on the Quilt Alliance site.