For many Americans, the 4th of July means cookouts, fireworks and a chance to celebrate their country. Since we’re just a few days past Independence Day, this week’s Q.S.O.S. Spotlight features several quiltmakers who have made quilts that salute the United States!

Carlie Nichols of North Carolina shares a quilt she made for American service members: 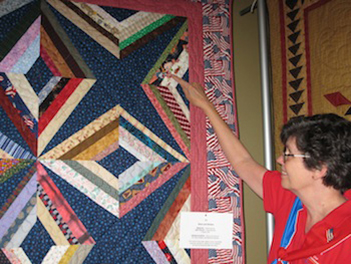 “The quilt I brought with me today is a patriotic quilt, I’m always looking for interesting, new patriotic patterns and this one I designed after seeing a picture on the internet of a quilt that was going to be on the cover of String Quilt Revival. I love string quilts and have made many of them but this one was a little different, so I took the picture, I sketched it myself and I drew it to be a little bit larger and made it into more of a patriotic quilt and it’s very patriotic, actually. The stars on the quilt are navy blue, and the border, as you can see, is red, white and blue and it’s plainly patriotic. It’s going to be a hard one to let go of but I think I’ll be able to… I know it will go to one of our service members or veterans, and from my experience in the last three or four years I realize how much they appreciate them. So knowing that they will go to someone who has given so much for our country means a whole lot to me.”

“The idea to do this piece was to celebrate the year 2000 and my upcoming U.S. 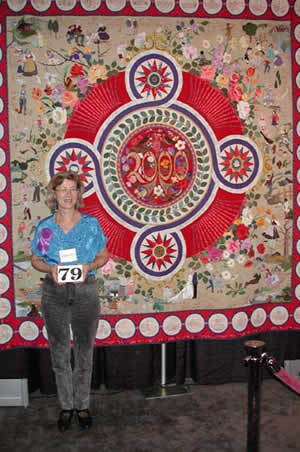 citizenship and I wanted to use mainly the colors of red and blue… My wish was to become a citizen in the year 2000. I did send my application went in 1998 and it could take three months to three years to become a citizen, as it will be picked by computers so I thought I wish it would be the year 2000 that I get it. And my wish did come true but my friends teased me and said, ‘Do you refuse it when it comes today or next week,’ and I said, ‘Of course, not because I would have it nicely wrapped up in the year 2000.’ And my wish did come true to become an American citizen. I will actually be the citizen of fifty states and so I thought I’d do the border around the quilt with the pictures of all fifty State Capitols. They are in order by year of their admittance into the union. The two in the middle in the top row are The White House and the State Capitol in Washington D.C. and then the fifty states go clockwise. There are all together fifty-two circles, because only the fifty did not work on the square. I laid out the quilt, starting from the center, with the 2000 easy to see.”

Carole Lyles Shaw shares a quilt she made to honor America’s veterans–including her own family–for a 2008 show of quilts celebrating president Barack Obama’s inauguration. 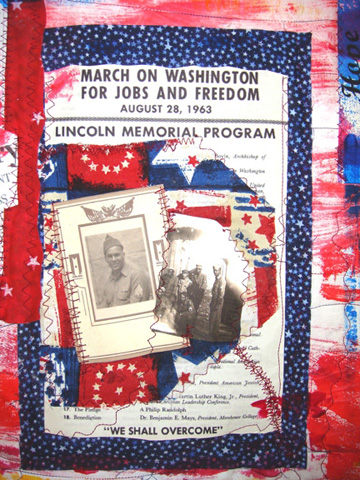 “This quilt is part of a series of quilts and other mixed media art work that I am creating to honor the memories of ordinary men and women who served in the American Armed Forces, particularly in the early part of the 20th Century and most of the work features images and documents and so forth from 1960 or earlier… What I’ve done is I’ve transferred photographs onto fabric and some of these photographs are from my family collection that I have of my father, my uncles and some of their friends. I have a letter that was sent by the White House to my father thanking him for his service in the Armed Forces and that letter dates to probably the late forties or early fifties…

Some of the words on my quilt are ‘land of liberty’ and ‘stars and stripes’ and ‘on the path to change’. Those words, those themes are what I wanted to convey. It is a narrative quilt, a story quilt almost but you’ve got to kind of read it slowly to get the full story.”

You can read more stories about quilts and quiltmakers at the Quilters’ S.O.S.- Save Our Stories page on the Alliance’s site.