Today’s Q.S.O.S. Spotlight is on Charles Wunderlich, a retired member of the US Air Force who began quilting after leaving the service. Charles shared with Kay Jones how he began quilting in his interview conducted 13 years ago today. 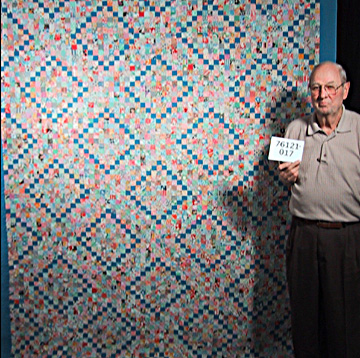 “Kay Jones: Now, how did you become interested in quilting?

Charles Wunderlich: Well, my mother brought a top with her on a visit one time, here in Fort Worth. And I said, ‘What are you doing with that, are you going to quilt it?’ [CW is referring to his mother.] ‘No, we are going to quilt it.’ [CW is referring to himself.] ‘I have never quilted, I know what a needle is and a thread is, and that’s the extent of it.’ [CW referring to mother.] ‘Well, we’ll make it.’ So, we started each one of those deals, put the needle through and pull it back up. So, after an hour, I worked a little ways across, stitches about three to an inch, and anyway, that was a start. And, I guess I got hooked.

KJ: And when was that Charlie, about how old were you then?CW: Oh gosh, I don’t know, I was 50-something, in my fifties.KJ: And so, you’ve been quilting ever since?CW: Well, off and on and some more than others, but I have never made it a chore. I sat down at quilt-frame quilt and after a few stitches I decided, ‘Ah, this is not for me morning,’ and I get up and move the quilt and take off. Or I might quilt through lunch, all day long and get up to go to the doctor and come back and quilt some more.KJ: Quilt some more.CW: So, it’s according to how I feel, but I’ve never made it a chore. It remains an enjoyable hobby, if that’s what you call it. And I’ve been with it now for twenty-six, almost thirty years. […]I’m retired. I spent thirty years in the U.S. Air Force.

KJ: In the Air Force? That take you to different parts of the world?

CW: Oh, took me to different parts, yes. Europe, Asia, Southeast Asia, spent two short tours in Vietnam. Spent four years at then Carswell Air force Base, built a house, married, left the house, kept it rented, moved back to it when I got out of the service. But, while I was in the service there were too many other things that had to be done, so this came after I retired.

KJ: The quilting came after retirement. You weren’t quilting when you were traveling around the world, but were you interested at all in quilts and quilting?CW: Never crossed my mind.KJ: Not till your mother said you’re going to learn to quilt?CW: That tripped the trigger.KJ: Why do you think she decided then was the time Charlie?CW: I don’t know, there was never any comments. I never asked the question, ‘Hey why did you do that? Why did you bring that quilt?’ But, that started it. And it’s all, I don’t even know what crossed her mind, she never said why she brought that. But, she did tell me who was going to quilt it.”KJ: And you did.”