In 1967, the United States Congress officially named Memorial Day as a day to celebrate and remember men and women who died while serving in the United States Armed Services. For many years, quiltmakers have been making quilts to honor those service members or comfort the loved ones they left behind. This week’s Q.S.O.S. Spotlight features a quilted tribute to a member of the armed service, a stunning and symbolic quilt Suzanne Botts of Missouri made for her oldest son. 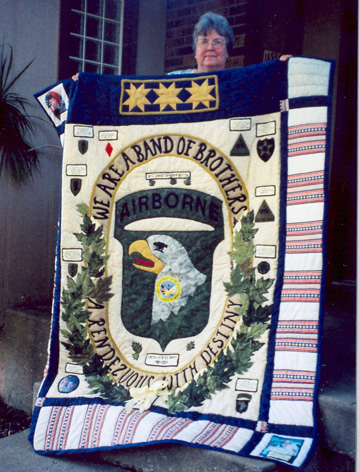 “I wanted to tell about the one I’m currently working on, which is for my oldest son who retired from a twenty-year career in the Army last fall.

The main body of the quilt is a tan fabric that has a pattern in it that looks sort of like a cracked glaze on pottery. The cracks are an indeterminate color – gray, navy, olive. In the center of that top I appliquéd the head of an eagle from the 101st Airborne’s patch. I didn’t want to put a stark white head on the eagle because I wanted the colors to be somewhat muted in this quilt. And I was lucky enough to find a soft gray fabric that sort of looks like a batik and the pattern in it resembled the grain of feathers so I used that for the eagle’s head. And then his beak of course is a dark gold and his tongue is red as in the patch, the army patch. And I enlarged this and put it in the center of the quilt on an olive-green shield. The top part of the 101st patch that says Airborne, I did the letters for the Airborne out of felted wool. I felted the wool myself and appliquéd those letters on.

Down in the center of the eagle’s neck, I put in, in reverse appliqué, a cross-stitched Army emblem. I set this 101st Airborne patch in the center of an oval, which is meant to represent a tree. The tree stands in my front yard and has born any number of yellow ribbons for my sons who were in Desert Storm and then Chris in Iraq. I couldn’t afford $75 a yard brown linen, so I used a linen tablecloth and cut an oval to surround the eagle. And on the top of that oval, around the top third of that oval, in felted wool letters it reads, ‘We are a band of brothers.’ Around the lower third of that brown oval the letters read, “A rendezvous with destiny,” which is a famous statement made about the destiny of the 101st Airborne.

Up the sides of the oval I am in the process of appliquéing leaves, the pattern for which came from that same tree that carried the yellow ribbon. And segments of the yellow ribbon that was on that tree for the year while my son was in Iraq are being woven into those leaves and will be tied at the bottom of the oval right over a cross-stitch replica of the bronze star that he earned, was awarded for his service in Iraq. It will have his name and service dates. Then I have a collection of patches from all the units in which he served – about twelve of those. And I am cross-stitching labels to identify those patches with the location, for instance Ft. Campbell, Kentucky, the dates he served there, the name of the unit that he was in, and the motto of the unit – Screaming Eagles or whatever.

The cracked glaze fabric that makes up the center of the quilt is bordered with a two-inch wide navy blue band. Three eight-inch borders outside of that are striped with muslin alternated with red and blue striped fabric that has stars in it, representative of the flag. The top right and the lower left corners of the quilt borders are fabric that has the Pledge of Allegiance printed on it. The top left square of the border has a photo of my son, his flag picture, from basic training when he first went in the Army. The lower right hand square of the border has a photo transfer of my son in desert camouflage being greeted by his two daughters at the airport when he came home from Iraq. The caption under that picture will read, ‘Home is the warrior, Home from the fields.’ […]