Bonjour! Today, July 14th, is Bastille Day–the French national . Browsing the Q.S.O.S. archives, I couldn’t help but notice that there were two interviews from quiltmakers who participated in a project to celebrate the Marquis de Lafayette, the French general. What better day than Bastille Day to share these two quilts and their stories?

Kay Marburger shares the story of one of her first quilts: 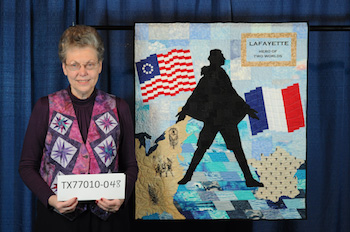 My quilt, Lafayette Hero of Two Worlds, was my very first quilt that I made starting from scratch. I live in Fayette County, the town La Grange [Texas.] and in 2006 the city of Lafayette, Louisiana, decided that the next year they were going to have a big celebration celebrating the two hundredth anniversary of the birth of the Marquis de Lafayette from France, after whom their city was named… My idea was a silhouette of Lafayette standing with his feet apart, one foot in the United States, one foot in France. I started thinking about that, I really had not been quilting that long at that time and I really didn’t have an idea about how to go about doing this, but I just kind of sketched and just kind of drew and then I kind of figured out by looking at maps and kind of tracing the shape of the United States and France and kind of playing around with enlarging things and I got my basic outline, or background design for the quilt. I was going to have Lafayette, water, of course the Atlantic ocean between the United States and France, and the sky in the background above, but I really didn’t want to do all the detail on Lafayette so that’s why I chose the silhouette. I was kind of trying to decide what I was going to use on my quilt, to make Lafayette. Black of course was the first thing that popped into my mind. I just put that down as black, then I decided, “Well maybe I ought to use several different blacks,” and just kind of intersperse them because I had been collecting some water fabrics and some sky fabrics, and I knew that I was going to use a bunch of different water fabrics and a bunch of different sky fabrics. This, like I said, was my first foray into designing my own quilt.

Also from La Grange, Texas, Kathi Babcock shares a collaborative quilt that traveled around France before returning to Texas: 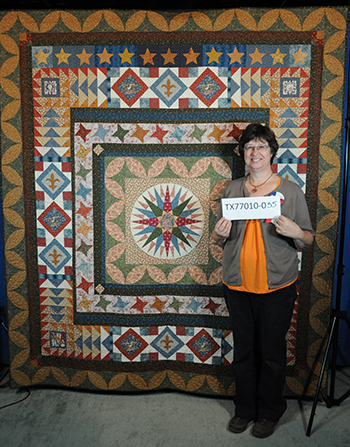 hung in Lafayette, Louisiana in honor of the Marquis Lafayette’s 250th birthday or something, I think it was 250. They sent out invitations to towns that had names associated with Lafayette because he did this triumphal tour and apparently a lot of cities in the United States ended up being named after him. I live in La Grange in Fayette county [Texas.] and La Grange was the name of Lafayette’s château in France and so we’re kind of a double whammy that our town and our county are named for Lafayette. One of the girls in town got really excited about the idea and our town ended up contributing three quilts to the exhibit. I captained this one. There were other people in the group that made blocks but I primarily designed, built, and quilted it and it was exhibited at that exhibit in Lafayette, Louisiana and after that exhibit, it was chosen to go on to, it went to France and it went to six museums in France included the Musée de Toile de Jouy, you know Toile where it was originally made and at that time if you looked on their website, this was the quilt they picked for their website and when that six months was over as it traveled, it came back to the United States and the DAR Museum in Washington, D.C. picked the exhibit up. So it hung at the DAR Museum for a few months before it finally came home to me.

You can read more stories about quilts and quiltmakers at the Quilters’ S.O.S.- Save Our Stories page on the Alliance’s site.