Here at the Quilt Alliance, we’re counting down the days to next month’s Quilters Take Manhattan event. Our featured speaker this year is quilter, designer, and teacher Hollis Chatelain. I noticed that Hollis has not one but two fantastic Q.S.O.S. interviews on our site, so I thought I’d share a few excerpts from her interviews about her influences and thoughts on quilting.

In Hollis’ first interview, from 1999, she described the roots of her passion for quilting and the important role her time in Africa plays in her art.

I graduated from Drexel University in 1979 with a degree in design. Then I worked in 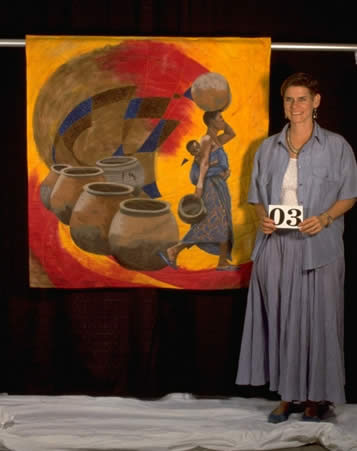 photography and drawing for a number of years. I went to the Peace Corps in 1980 in Africa where I met my husband. We decided to stay. I was very interested in photography when I went over, so I took thousands of photographs. Then we moved to a country where it was very difficult to take photographs, so I did more drawing. From there I kind of combined the two; I started teaching drawing later on. I taught drawing to many different people from all nationalities, all ages. I’ve taught drawing from age seven to age eighty-five. And I was lucky enough to teach people who always wanted to draw, but had always kind of been afraid to. And I just love it. But then if you would have told me three years ago that I would be doing this, I would never have believed you. I never thought I would do imagery. But in moving back to the states, I missed Africa so much. I returned with teenagers. I’d been gone sixteen years, and my heart was in Africa. So the way to go back for me, was to draw and paint the people–I what I loved most about Africa. It was an honor to live among people that I admired every single day. I wanted to be back there. So I taught myself to paint. I had never painted before, or painted imagery. I had used paintbrushes in my work, but I’d never painted imagery. Somehow I think that something was given to me to be able to transfer that love for the people into creating them. I don’t know how, because I never could have done this before. I don’t know, I just kind of did it…

Maybe it is because I choose to paint what is the most important thing to me. And that is the joy, the spirit, the pride of the people. Where I lived in Africa, about ninety percent of the people are just farmers. It’s not all turmoil and suffering. That exists, of course that exists. But it exists in America, too. It exists everywhere. But that’s what we hear about, we only hear about the bad parts. And I would like Africans, in my work, to be more than silhouettes. They’re not just the background silhouettes; they’re real people. I would like people to say, ‘I remember the beauty of the people from her work. I remember the spirit.’ Somehow I feel a gift was given to me to be able to bring that message across. It’s not about me; it’s about the artwork… A lot of people say, ‘well, why don’t you just paint?’ I say, ‘Well, that’s not three dimensional’. What I like most about this is the fact that there’s some texture to it, and it’s three-dimensional. Some people may say that my work is just painted, but if you look at it quilted and unquilted, it’s two totally different things. The quilting is really at least half of it.

In her second interview, from 2001, Hollis shared a little bit about the personal experience of quiltmaking: 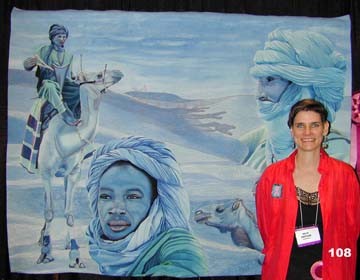 I do art for my own selfish reasons, to learn more, to be challenged; I’m obviously a challenge type of person because of the lifestyle that I have lead. I like to be put into new things. I like to try new things. I don’t like to do the same thing again and again and again. That’s why I don’t do two of the same quilt. Once I’ve done it, I lived it and I move on. That’s how I approach my artwork. I enjoy learning, so I set up my own challenges through my artwork. I will do a blue piece because blue is appropriate for this piece, but I wouldn’t do another monochromatic piece in blue just because I like the color blue. There has to be a reason for it. These are called the “Blue Men”, that is their nickname, that’s what they’re called throughout West Africa. So, “Resident Alien” was made in green because aliens are green, because resident aliens are given a green card. I really enjoy the challenge of it. But I also do the realistic ones, purely realistic, and I am continuing to do them, because it allows me to live with those people for that much longer. Since they are sold and they do go out to their new homes, like children leaving your house, I can’t live with them very long and I miss them so I need to do more just to be back where I want to be, to be back with those people who brought me so much. I do them. I do the purely realistic ones, to be with them. But I do these to challenge myself.

You can read more about Hollis Chatelain and the techniques she uses in her interviews here and here. And you can always find more quilt stories at the Quilters’ S.O.S.- Save Our Stories page on the Alliance’s site!